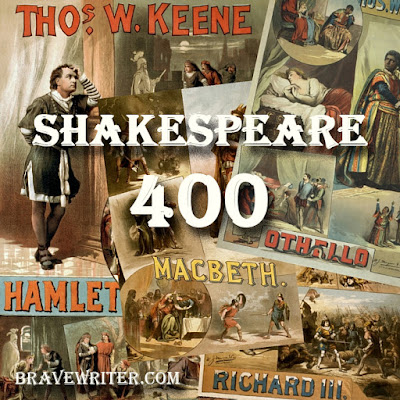 On Friday evening, I was skimming through Pinterest and saw the above image--and immediately loved it, pinned it to my "Bardilicious" Board, and "favorited" it...and then noticed my name below the image!!

To mark William Shakespeare's 452nd birthday this week, (he was baptized on April 26, 1564, and children at that time were usually baptized three days after birth) and the 400th anniversary of his death, celebration is going on in the United States as well as in Stratford-upon-Avon.

When I was in a Shakespeare class in high school, we had a HUGE birthday party for Shakespeare with British food and drink (rather like a high tea). A month beforehand, we had each drawn the name of a fellow student for which we were to make a handmade gift. I remember hemming handkerchiefs in pink embroidery thread with the initials “M.A.” for one student, and I still have the floral wreath strung with ribbons (meant to be worn on the head) hanging on my bedroom wall…although I don't remember which young man made it for me (or more likely, his mother made it on his behalf, LOL).


So how is the 400th anniversary of the death of the Bard being celebrated?

Here in San Diego at the Old Globe Theatre:

So let’s celebrate Shakespeare's birthday/deathday this week in our homes. Here are some ideas:

How are you planning to celebrate???

“So long as men can breathe or eyes can see,
So long lives this and this gives life to thee.”
~Sonnet 18 by William Shakespeare

Wishing you a Bardilicious weekend,

Posted by Susanne Barrett at 1:21 PM