Yes, spring at Brave Writer means SHAKESPEARE!!! In fact, I'll be teaching two Shakespeare classes this spring, starting with a high school course in one of Shakespeare's most controversial plays, The Merchant of Venice.

The Merchant of Venice class still has a couple of openings, so join us quickly, and we'll get you in. :)

We'll begin with activities on Shakespeare's life and times, study the Elizabethan theater scene, examine Shakespeare's use of language, and finish the first week with a peek at some background and sources for the play.

Then we'll read and discuss the play, act by act, for the next two weeks, and finish the last week with a viewing of one of the film versions (I'm leaning toward the Laurence Olivier version from 1973 right now) and the writing of an exploratory essay on one of several possible topics.

To get us in the mood for our study of Shakespeare, here's a fun version of The Hokey-Pokey in Shakespearean English: 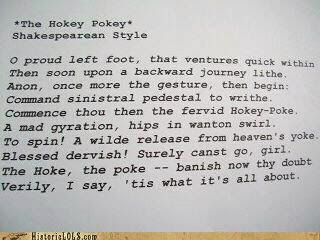 So I hope to see some of you in my Merchant of Venice class, and if not now, then perhaps in the upcoming Shakespeare Family Workshop which begins May 14th.

With a flourish of my quill pen,

Posted by Susanne Barrett at 11:50 AM